skip to main | skip to sidebar

It started out as a typical rehearsal. Typical, that is, when you live in a major urban center like Manhattan: Packing your car full of guitars, amplifiers and assorted gear, driving through the craziness of New York City, then placing yourself at the mercy of the parking gods, hopefully to find a spot within walking distance of MRC’s recording studios on West 57th Street, before lugging your stuff up to Studio B on the third floor.

When you reside in Manhattan, you live in an apartment, not a freestanding dwelling like a normal house. If you’re a practicing musician, you’ve already got a big problem on your hands. With adjoining walls everywhere, there simply is no acceptable protocol for rehearsing—be it singing or playing an instrument—without turning your neighbors into hostile enemies.

As one of Philips Records’ new young acts in 1968, our five-man band, Ross Legacy, was allowed a massive perk by the label — free use of its studios (they were a subsidiary of Mercury Records) for rehearsals when the facility was “dark,” or not in use. Before that tidy arrangement was extended, Pam—my singing partner and first wife—and I would jump in our green Volkswagen bug and head from our midtown apartment for a house our band knew of in Manhattan Beach, a distant suburb of Brooklyn that lay a daunting hour-and-a-half drive away. And believe me, a 90-minute drive through New York City streets bears no similarity to motoring through countryside.

This particular evening in late 1968, as mentioned earlier, began the same as the others: Hooking up at the building’s entrance with lead guitarist Frank Fuchs, bassist Mike “Eggie” Ekster, and drummer Steve Turok, before freighting our gear up to the studio. The band always had more music to rehearse than the time we were allotted by our generous benefactors, so little time was wasted on idle chatting and catching up.

We had been at it for almost an hour, easing through our limited-but-growing original folk-pop repertoire and settling into a comfortable practice rhythm, as it turned out, just seconds before the most amazing shock of our collective young lives.

Much to our surprise, we had a stowaway in the studio—a world-famous one at that.

As the band was moving through a number, the door to the control room inside the studio suddenly opened. The engineer’s suite had been “dark” as well, the black opaque-like glass all the while concealing the presence of one exhausted producer of the Hamilton Face Band, another of Mercury’s artists, who were recording just down the hall from us in the larger Studio A. Now, a massive Afro emerged from behind the door, followed in quick order by the rest of the man’s instantly recognizable face.

It was Jimi Hendrix.

“Hey, y’all,” a smiling Hendrix said. “Sounds good what you got goin’ on here!” 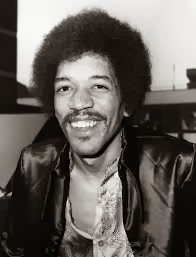 Five faces remained slack in disbelief. Well, it was an odd situation, after all. I mean, just what was the most famous rock star on the planet doing in our rehearsal room, and why did we not know that for an hour?

Then, as if reading our combined minds, he filled in the Why. “We took a break across the hall. This studio was dark; it looked like the perfect place to hide away for a little nap.”

Five faces stared blankly back at the superstar. With a wave and a big smile, he was gone as fast as he had appeared.

It’s funny how you review a major accidental event after the fact. How did we sound? we wondered. Was anything said that we’d be embarrassed by before we knew he was in the studio? Were we in tune? Nothing negative jumped out at us in our excited appraisal of the kingly visit from rock royalty. All to a man, though, wished we had known that he was in the room, so we would’ve been at our best. Needless to say, the remainder of the rehearsal was our finest ever. Within two and a half years, Hendrix would be dead from an overdose and ascend to legend.

Thirty-four years later, I tracked down Fuchs, our guitarist, now in L.A. He had produced some albums and made music himself in the long expanse since our last contact in ’69, the year Pam and I moved to Nashville. He was originally suggested by the wife of the late Woody Guthrie, whom I’d once met in her fight against Huntington’s disease, the disabling robber that quieted the great Woody. Frankie had taken clarinet at 9 then picked up piano and guitar on his own. Later, he spent his college summers as Arlo Guthrie’s accompanist. I used to marvel at that small-world aspect that involved us both knowing Marge. The first thing he brought up conversationally that day, though, was the brief but stunning instance with Hendrix so long ago. Frank still recalled it all with great enthusiasm.

“Man, he said the music was good!”

I’ve thought about that. Sometimes only slight degrees separate true inspiration from total deflation. What if this rock god had said instead, “You suck. Can’t a guy get any sleep here!”
Posted by Alan Ross at 12:57 PM

Alan Ross
Alan Ross is the author of 32 books, including Away from the Ball: The NFL’s Off-the-Field Heroes. E-mail him at: alan@rossmusic.net